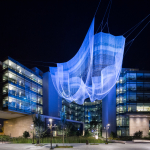 Visible from within the foundation’s campus and from several vantage points in the surrounding area, the piece is created by suspending a custom crafted net sculpture between two of the foundation’s buildings over the courtyard. The effect is that of a floating voluminous form without obvious means of support. Composed of ultra-lightweight fibers, the sculpture creates an ephemeral presence in the Seattle sky. During the day, the sculpture’s hues interplay with the changing colors of sky. At night, it becomes an illuminated beacon as colored lighting sequences are projected in real time as the sun rises in each of the foundation’s global offices. This connects the work happening in the campus to the tangible services being delivered to people around the world. The sculpture is a physical manifestation of connectedness. The number of knots alludes to the notion that the work of a single foundation member can affect a million lives. The sculpture is visible to the public from the campus overlook, as well as from several vantage points nearby.  Images included here are for editorial use only and are provided with permission of the artist.  Contact:  +1-206-709-3400 media@gatesfoundation.org Location: 500 5th Avenue North, Seattle, WA Artist: Janet Echelman (Boston, MA, USA) Title: Impatient Optimist 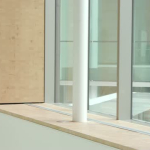